Why Burning Garbage is a Bad Idea 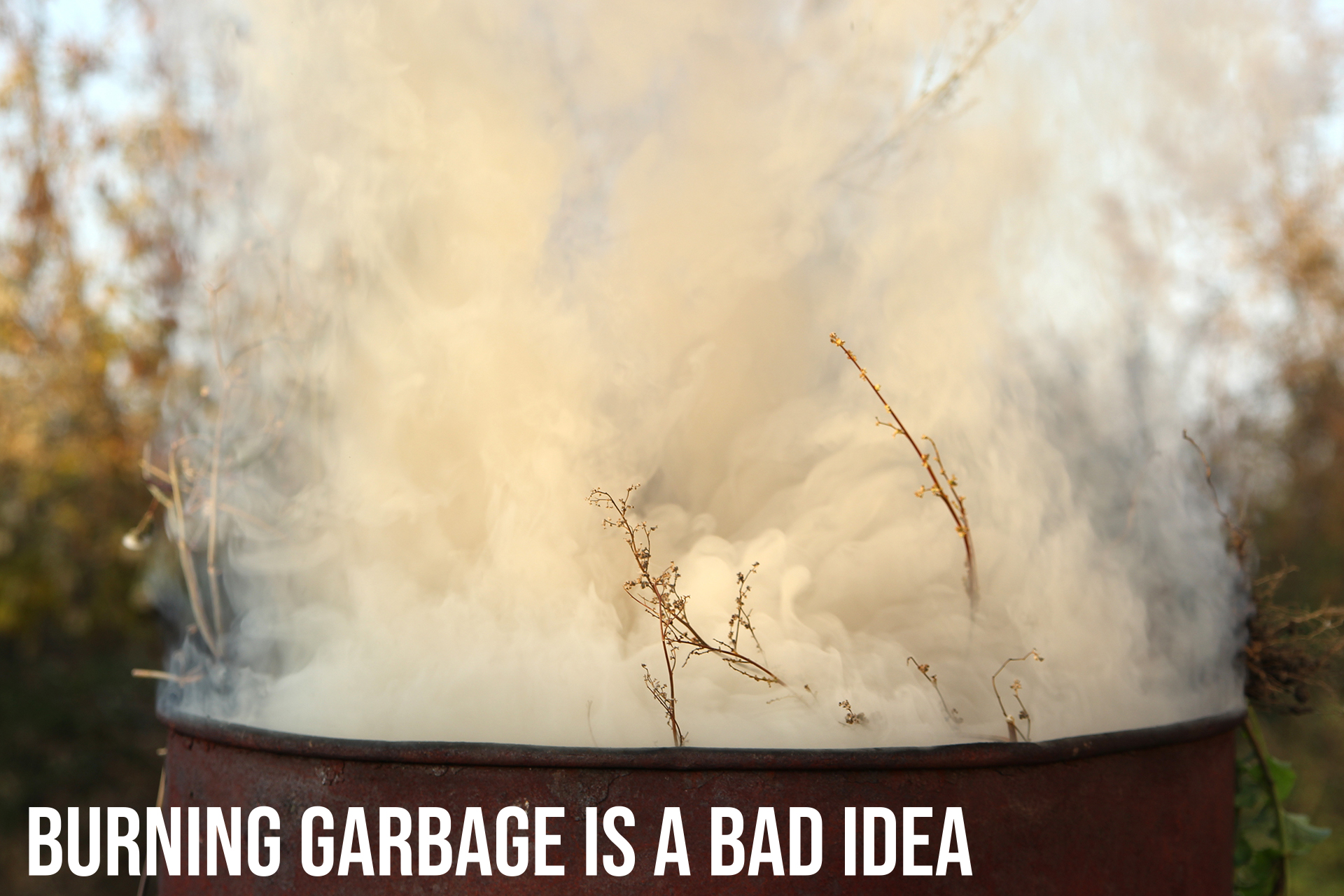 Why Burning Garbage is a Bad Idea

Burning Garbage Back In The Day

“When I was a kid, growing up in Grey-Bruce Township near Owen Sound, I remember taking trips to the dump with my father. Often it was after a small construction job, as he was a local contractor. As we got closer to the landfill site, it wasn’t difficult to locate as there was always a perpetual fire burning, and smoke could be seen from a great distance. At one time open air burning of garbage in Ontario was common. – Site Admin.

This is no longer the case as “97% of waste requiring final disposal is sent to landfills in Ontario, and 3% is incinerated (not burned in open air). Yet, some people think “We’ve been burning garbage for ages, so what’s the big deal now?” Let’s talk about why burning garbage is a bad idea.

A Change in Thinking

The Canadian Government states on their site Canada.ca “We now understand that open burning of garbage — even seemingly harmless materials like paper, cardboard, yard waste, and construction debris — releases a hazardous mixture of cancer-causing compounds and other toxic substances when open-burned.” Most municipalities throughout Ontario (and the rest of Canada) have bylaws in place to prevent open burning to restrict the types of materials that are burned. In addition to municipal bylaws, some communities enforce the use of burn permits to further promote alternatives to burning. The result is that people are changing the way they dispose of waste. One example is that, instead of burning a pile of leaves (in rural areas) it’s easier to mulch them up with a lawn mower, compost them, or have them collected by a company with a proper organic waste program. (Such as Acorn Waste Service).

How about the farmer, way out in the country that burns his garbage daily in a metal barrel? This needs to stop as well. Not only is he potentially harming himself and his family, but their environment is one that trickles down to consumers as well. There is a particular concern for garbage that is burned in agricultural areas as it could expose crops, and water sources to dioxins and furans. Animals that eat contaminated plants or drink contaminated water can pass these dangerous chemicals to humans via meat and dairy products. Read more about how dioxins and furans affect human health – CDC.

Did you know? “In Canada, the open burning of garbage produces more dioxins and furans than all industrial activities combined.” – Canada.ca

How is Incineration different from open air burning? High-temperature Waste-to Energy (WTE) incinerators are said to reduce solid waste by 90%. Using advanced air pollution controls and new technology approximately 99% of all dioxins, furans, and mercury released are eliminated during incineration. This Canada wide standard is mandated and enforced by the Canadian Council of Ministers of the Environment (CCME).

As we learn why burning garbage is a bad idea, it would be irresponsible not to change and protect the health of our family and our community. Put simply, what goes up in smoke comes down as “fall out” or raw chemicals landing everywhere. Even if you’re not exposed directly to the smoke, harmful chemicals including dioxins, furans, arsenic, mercury, PCBs, lead, carbon monoxide, nitrogen oxides, sulphur oxides, and hydrochloric acid to name a few, will soon be falling out of the sky around your fire. As well, some of the mentioned pollutants are left behind in the ash of the fire and seep into the ground and water.

Let the pros at Acorn Waste manage your garbage, and organic waste. We work hard to reduce what goes to landfill through recycling and food waste programs, and dispose properly of the rest. So, before you light that fire, call Acorn Waste Service.